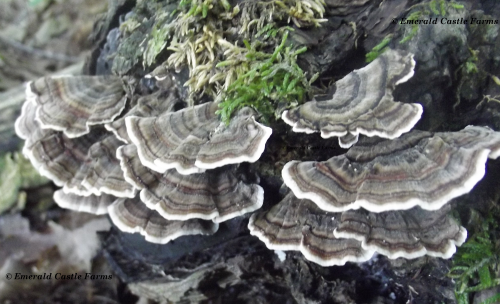 
Turkey Tail mushrooms (Trametes versicolor), has been the subject of a flush of recent studies suggesting that the compounds contained within this mushroom have anti tumor properties. Wasser and Weis (1999) noted that medicinal mushrooms have a long history of use in folk medicine against cancer of the stomach, esophagus, lungs etc. Many exhibit antitumor properties and provided effects to the immune system and might be useful in treating a variety of disease conditions. Polysaccharide-K is present in hot water extracts of turkey tail mushrooms. This constituent possesses immune stimulatory activity, and “has demonstrated antitumor efficacy in multiple types of cancer.” (Quayle, Coy, Standish & Lu, 2015)

Please keep in mind that nowhere on this website am I making any claims of any kind. These statements have not been evaluated by the Food & Drug Administration. These products are not intended to diagnose, treat, cure, or prevent any disease. I am only sharing my research with you -which is referenced here on the page.

We use both alcohol and water to extract the most beneficial substances from the raw material. Hence, a double extract. We first extract over time (at least a month) in alcohol. We then normally do three water extractions on the material after we remove the alcohol extract. The water extracts are then reduced to a similar volume as the alcohol extract. The alcohol and water extracts are then combined to provide a robust extract product that consists of approximately 25% alcohol by volume. After combining, the raw extract is then allowed to rest to remove unwanted sediments. The finished extract is then packaged in new bottles, labeled, and sealed to be tamper proof. 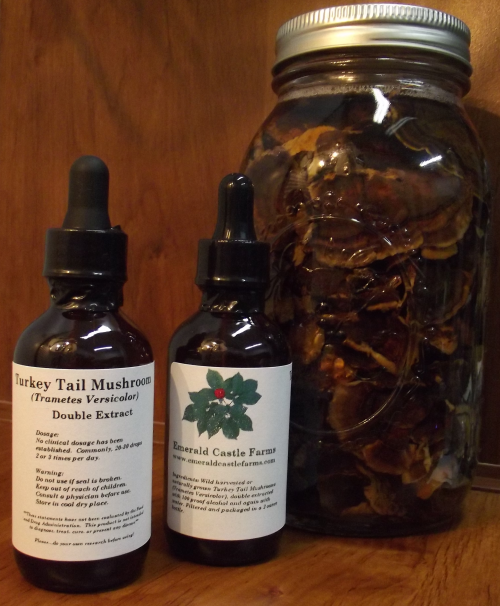 About Turkey Tail and its Benefits

Without doing exhausive research on the subject, there are a significant number of scientific studies which show turkey tail mushrooms contain some powerful and highly beneficial properties which can be used medicinally. These medicinal mushrooms have been used in traditional folk medicine for hundreds if not thousands of years. But, the human studies on these natural medicinals are mostly from outside the United States. Yet, with brief research, human studies show the following non inclusive list of conditions with which turkey tail mushrooms may benefit:

The question is evident -why do we not hear more about these medicinal mushrooms from doctors and pharmaceutical companies in the United States? Well, I may have found the anwser. Shortly after the United States Food & Drug Administration (FDA) granted approval for a study funded by the National Institutes of Health, Dr. Masa Sasagawa a researcher at Bastyr University, in a 2012 article explains why natural products like mushrooms are lacking in human trials. The reason is because of federal funding. If a program is federally funded, the researchers must seek and gain approval from the FDA before conducting the research. As Sasagawa noted, natural products are not consistent and are very complex containing thousands of individual elements. This makes specifically identifying a particular constituent and its mode of action very difficult. Additionally, because medicinal mushrooms have been used in traditional folk medicine for hundreds and even thousands of years, makes obtaining patents on the derivatives unlikely. This removes the high dollar profit big pharmaceutical companies look for when funding private research.
Read the article here

As a result, most of the human studies listed here were done ourside the United States.

When we begin to consider animal studies and studies in vitro we discover the potential for benefit from the constituents contained in the turkey tail mushroom are significant. Again, this is a non-inclusive listing found with brief research:

Although most of the research that I've listed on this page was done in vitro (in a Petri dish) or on animals, there are some very significant human studies using the constituents of the turkey tail mushrooms in clinical studies. I am not making any claims of any kind. These statements have not been evaluated by the Food and Drug Administration. These products are not intended to diagnose, treat, cure, or prevent any diseases. I am only presenting scientific research and encouraging you to do your own homework and come to your own independent conclusions. I’ve tried to only make it easier for you. All of these articles can be looked up online. Start with pasting the title into Google Scholar. (scholar.google.com)


Some Scientific Studies on Human Subjects

Other Scientific Studies and References


These statements have not been evaluated by the Food & Drug Administration. These products are not intended to diagnose, treat, cure, or prevent any disease.

Please...do your own research before using!


To order by mail, send a check or postal money order for the correct total amount (including sales tax for Ohio residents), made out to Castle Enterprises, to:

Don't forget to include your legible name and mailing address. From the Shopping Page, just add your items to the Paypal shopping cart, enter your zip code to calculate correct shipping, and print the page. This will provide a list of your items, the correct shipping charges (including sales tax if you are in Ohio), and an accurate total amount for which you should make out your check or postal money order. Just drop a copy of the shopping cart in the mail with your check or money order.